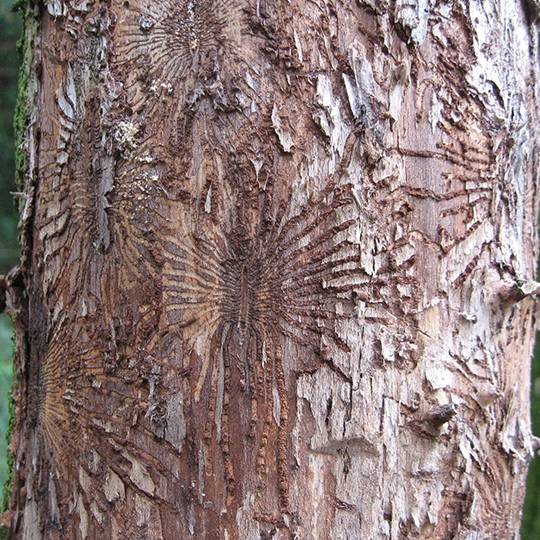 Popular for their beauty and ability to grow fast and thrive in a variety of conditions, the American elm tree used to line many main streets in our country. But that all changed as Dutch elm disease began its devastating domination in the United States around 1930. Considered one of the most destructive shade tree diseases in North American, once it affects one elm tree, others nearby are soon to follow.

Dutch elm disease is caused by two related species of fungi—Ophiostoma ulmi and the more aggressive of the two, Ophiostoma novo-ulmi, which is responsible for most of the devastation. This fungus attacks the tree’s vascular system, preventing the proper flow of water and nutrients. The fungus is spread in one of two ways:

Transported by the elm bark beetle. Adult beetles tunnel into the bark to lay eggs, creating galleries in the sapwood below the bark. Once the eggs hatch, the larvae begin to feed on the sapwood. When the larvae mature and leave the fungus-infested tree, the adults carry the fungus, introducing the disease to neighboring trees.

Spread through the connected root systems of nearby trees. The Dutch elm disease fungus can move from an infected tree to neighboring trees through their interconnected roots (or root grafts).

Mostly in late spring (but also occurring any time during the growing season), symptoms spread first to individual branches, then throughout the entire tree, and eventually kill it. This process can happen all in one season or take a couple of years. What you will see:

Plant trees that are more resistant to the disease. While the American elm tree is highly susceptible to the disease, other species, like many European and Asiatic elms, may be more tolerant. No native elms are immune, but some hybrids have been selectively bred for better survival.

Pruning. This method only works on trees that have newly infected crowns, but the disease must be caught early enough and cannot have already spread via the root system. Wood pruned from infected elm trees must be destroyed. Pruning is more effective when paired with the use of a fungicide. Of course, if the damage is serious enough, the entire tree should be removed before it infects others.

Breaking the connection. If larger trees are within 25 to 50 feet of each other, it is likely that some of their roots are connected. All it takes is one tree with the disease to infect the others. Breaking of the root grafts should take place before the infected tree is removed. This is done with professional machinery.

Insecticides. One way to stop the disease cycle is to kill the elm bark beetles responsible for spreading the disease. Certain insecticides are often used, but are not always the most effective method.

Proper protection. There are fungicides that can prevent the elm bark beetle from spreading the infection. An expensive process that needs to be repeated seasonally, this treatment is injected into the tree by a professional.

If you want to learn more about identifying and controlling Dutch elm disease or other tree diseases, contact Elite Tree Care at 610-935-2279.

Call Elite Tree Care today at 610-935-2279 and let's talk about how we can help you with Dutch Elm Disease and other Pennsylvania tree diseases.