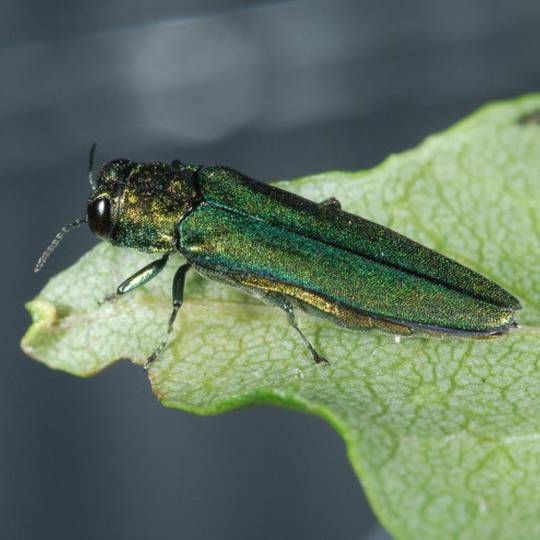 A serious threat to North American ash trees, the emerald ash borer (Agrilus planipennis) is a native of Asia that was accidentally transported into our country on wood or wood packing materials. This invasive beetle has caused infestations that are responsible for the death of tens of millions of trees—including green, black, white, pumpkin, and blue ash—and continues to spread quickly throughout the continent. Trees that are attacked usually die within a few years of infestation.

Approximately a half inch long, the emerald ash borer has an elongated cylindrical body that is a bright metallic-green color. Its red abdomen can only be seen when the insect spreads its wings. During the larval stage, the beetle looks like a cream-colored, flattened and segmented worm that can grow up to one inch long.

Female emerald ash borers lay their eggs on the bark of the tree. When the larvae hatch, they begin to feed beneath the bark of the tree, winding back and forth and creating S-shaped galleries. The galleries are filled with sawdust and frass (larvae excrement). This feeding cuts off the flow of water and nutrients to the upper and outer canopy of the tree, and is the eventual cause of the tree’s death.

Signs of an infestation:

Prevention is key when controlling emerald ash borers because treatments are not often effective on trees that are already infested. A good rule of thumb is to treat a tree that still has half or more of its canopy. Trees that are heavily infested should be removed and destroyed by a professional.

A successful method of prevention is to apply a systemic insecticide containing the ingredient imidacloprid into the soil near the tree’s roots. One treatment that has proved effective even after the ash tree is infected is to inject a pesticide with imidacloprid directly into the trunk. This usually destroys the larvae colonies.

There are actions you can take to help stop the spread of these invasive beetles. For instance, consider eliminating the sources of the threat. Since an infestation can spread even if there aren’t any visible beetles, always question the source of ash firewood, debris, trimmings, chips, and products such as packing materials. Only use local firewood—emerald ash borer eggs are hidden under bark, and therefore can go unnoticed when transported on wood from infested areas.

To find out more on how to prevent emerald ash borer invasions or to report a possible infestation, contact Elite Tree Care today at 610-935-2279.

Call Elite Tree Care today at 610-935-2279 and let's talk about how we can help you with Emerald Ash Borer and other Pennsylvania tree pests.