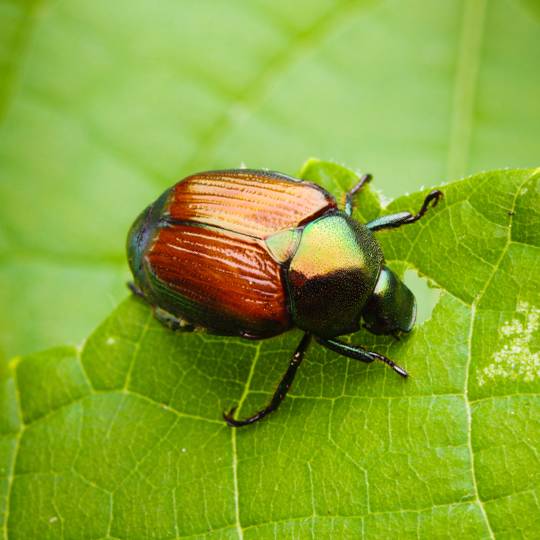 Considered one of the most devastating pests in the urban landscapes of the eastern United States, Japanese beetles (Popillia japonica) can cause significant damage to trees, ornamental shrubs, plants, and crops. This native insect of Japan was accidentally introduced to our country in the early 1900s and has been wreaking havoc ever since.

Characteristics of the Japanese Beetle

With their metallic, blue-green bodies and coppery wing covers, the Japanese beetle may appear attractive and harmless at first. This oval-shaped insect is approximately 1/3″ to 1/2″ long and 1/4″ wide. To distinguish them from other beetles, look for tufts of white hair on each side of the body.

Most active on warm sunny days, beetles emerge from the ground and begin feeding on your foliage in early summer. They are active from late June until early fall, and although the lifecycles of these invaders are only about 40 days, they feed in groups, making the damage more severe and widespread.

Female Japanese beetles lay their eggs in the ground and can produce up to 60 eggs during a lifetime. When the eggs hatch, the developing beetles, or white grubs, live in the soil and feed on the roots of grass and plants. During the winter they are dormant, and then pick up where they left off feeding in the springtime. They turn into flying adults by early summer.

The Damage They Do: Signs and Symptoms

The bugs themselves are often visible flying from one feeding location to another and the damage they do is easy to identify. The most obvious sign that you are under attack is finding skeleton-like leaves on foliage in your yard. This occurs when the adults feed on the tender parts of the leaves between the veins, leaving behind sparse, lace-like remains. Trees that have a severe infestation may have a scorched appearance.

There are many ways to protect the trees and plants in your yard from these invasive insects, and often, a combination of these methods is your best bet. Although the handpicking method may be successful for small infestations on smaller shrubs, ornamental trees, and plants, it’s not possible on larger trees.

Both the adult beetles and their grubs are capable of causing severe damage. From early spring to early summer, you can attack the grubs during the larval stage by using a product that contains milky spore, a type of bacterium. This method may take a few years to be thoroughly effective. Another approach is to use a solution of dish soap and water. When sprayed on the lawn weekly, grubs come to the surface and birds feed on them until they are gone.

Botanical alternatives, such as products with neem oil (which is derived from a tree) can deter beetles when applied at the first sign of an attack. Also, products containing parasitic nematodes can be placed in the soil to feed on beetles. You can get them at almost any garden center.

Despite popular belief, Japanese beetle traps may not be the best approach. Some studies show that they may actually attract more insects that they will catch, increasing the amount of beetles in your yard.

Keeping a well-maintained yard is important because strong, healthy trees are less susceptible to infestations. Make sure your trees, plants, and grass are well fed and watered. And be sure to weed when necessary—non-cultivated plants such as smartweed, Indian mallow, and even poison ivy can be a source of repeated infestations.

When choosing trees to plant in your yard, opt for species that are less likely to attract these pests. Some species that Japanese beetles are not fond of include ash, red maple, northern red oak, magnolia, hemlock, dogwood, and boxwood. However, they are often found feeding on birch, American linden, Japanese maple, pin oak, and Norway maple. They also find some fruit tree varieties and rose bushes quite tasty.

Many insecticides are effective on Japanese beetles, including pyrethroid products. If you want to use insecticide sprays or dusts on larger trees, it’s best to contact a local tree specialist to do the job safely and successfully.

For assistance with controlling Japanese beetles and other pests, contact Elite Tree Care at 610-935-2279.

Call Elite Tree Care today at 610-935-2279 and let's talk about how we can help you with Japanese Beetles and other Pennsylvania tree pests.