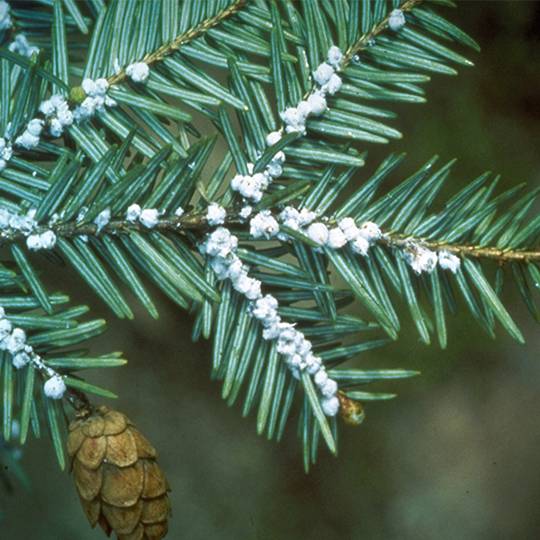 Natives of Asia, hemlock woolly adelgids (adelges tsugae) are causing extensive damage to one of the most popular trees in forests, parks, and yards throughout eastern North America. These tiny sap-feeding insects resemble aphids and spread their destruction quickly. Not only are they threatening the survival of the eastern hemlock and Carolina hemlock species, but they’re rapidly becoming a danger to our region’s overall ecosystem.

What Makes the Woolly Adelgid Dangerous?

Although woolly adelgids make themselves at home on all species of hemlock trees, they are only detrimental to the eastern and Carolina hemlock. The insects target new growth and can be found at the bottom of the tree’s needles. As adelgids hatch from eggs, they begin feeding on sap, draining the needles and stems. This eventually kills the whole branch and can lead to the death of the entire tree. These persistent pests spread easily to other hemlock trees by wind and by animals that come in contact with them.

There are a variety of chemical and natural methods to control these pests. If the treatment is successful, you should see new growth as soon as the insects disappear.

Chemicals. Chemical treatments are the most effective. Sprays and insecticides can help control infestations on individual trees, but trees must be saturated in order to destroy the adelgids. Applications usually need to be repeated. Systemic insecticides can handle larger trees when applied to the soil around the tree’s base (soil drenching) or injected into the tree itself.

Horticultural oils and insecticidal soaps tend to be less toxic and safer for the environment, but still should not be used too close to water sources. These treatments are best applied in the fall and often need to be repeated annually.

Biological control. Meet pseudoscymnus tsugae. A natural enemy of the hemlock woolly adelgid, this black lady beetle is about the size of a pinhead and feeds on adelgids. Research is currently being conducted on using these and other predators or pathogens to control adelgid infestations in forests.

For assistance with identifying, treating, and preventing hemlock woolly adelgid and other pests, contact Elite Tree Care at 610-935-2279.

Call Elite Tree Care today at 610-935-2279 and let's talk about how we can help you with Hemlock Woolly Adelgid and other Pennsylvania tree pests.